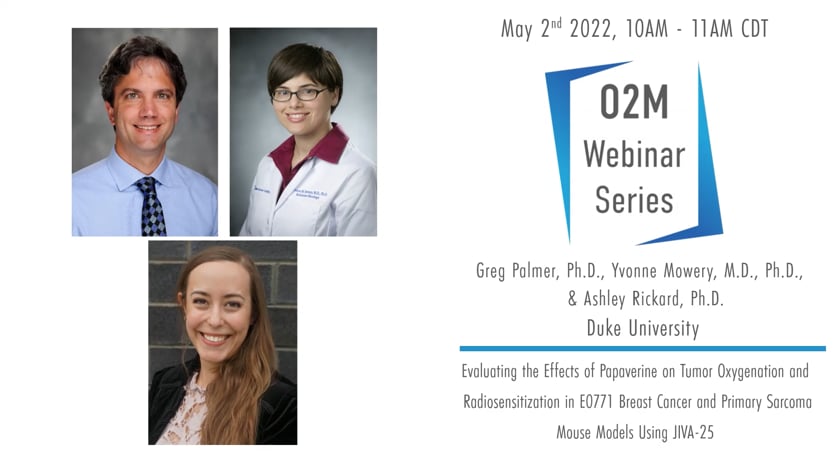 Hypoxia, a prevalent characteristic of most solid, malignant tumors, contributes to diminished therapeutic responses and more aggressive phenotypes. The major challenge in implementing hypoxic radiosensitizers is the lack of a high-resolution imaging modality that can directly quantify tissue oxygen concentration. A precommercial EPR oxygen-imager was used to quantify tumor hypoxia and investigate the hypoxia-modifying effects of the FDA-approved vasodilator papaverine (PPV).

Greg Palmer obtained his B.S. in Biomedical Engineering from Marquette University in 2000, after which he obtained his Ph.D. in BME from the University of Wisconsin, Madison. He is currently an Associate Professor in the Department of Radiation Oncology, Cancer Biology Division at Duke University Medical Center.

Yvonne M. Mowery, MD, PhD, DABR is a physician scientist and the Butler Harris Assistant Professor or Radiation Oncology at Duke University, specializing in treating head and neck cancer with radiotherapy and studying novel combinations of radiation with immunotherapy. She received her MD and PhD in Pathology at Duke University in 2012, followed by completing an Internal Medicine internship and Radiation Oncology residency at Duke University in 2017. She is the PI of an investigator-initiated phase I trial (NCT04576091) evaluating the ATR inhibitor BAY 1895344 with pembrolizumab and stereotactic body radiation therapy for recurrent HNSCC.