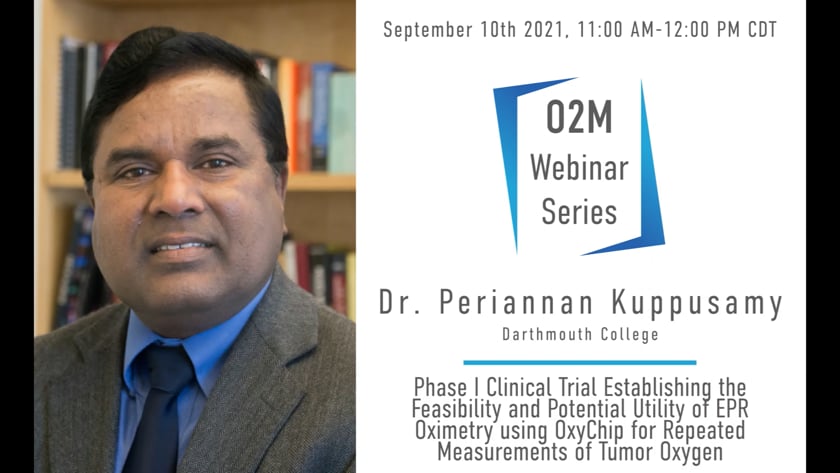 Clinical interventions to mitigate the impact of tumor hypoxia on cancer-treatment outcomes have been hampered by an inability to assess patient-specific tumor oxygen levels. The overall objective of this first-in-human study was to assess the safety and feasibility a novel oxygen sensor, called ‘OxyChip’, as a clinically viable technology to make individualized tissue-oxygen assessments. OxyChip is a paramagnetic oxygen sensor composed of oxygen-sensing lithium octa-n-butoxynaphthalocyanine (LiNc-BuO) crystals embedded in a biocompatible polymer. Patients with any tumor at &It / = 3-cm depth from the skin surface and scheduled to receive surgical resection (with or without neoadjuvant therapy) were considered eligible.

OxyChips were implanted in the tumor and subsequently removed during surgery. Oxygen (pO2) at the sensor location was assessed using electron paramagnetic resonance (EPR) oximetry. During each measurement session, the patient breathed room air, followed by a period of oxygen inhalation using a non-rebreather mask with 100% oxygen delivered at a flow rate of 15 l/min, and then breathed room air again. Twenty-four patients underwent OxyChip implantation in their tumors. Six patients received neoadjuvant therapy. Median implant duration was 29 days (range 4–128 days). The OxyChips recovered from the patients did not show any significant change in their oxygen sensitivity. The implantation procedure and the process of EPR oximetry in the clinic were well tolerated by patients. Histopathologic findings revealed no clinically significant pathology, indicating that the tissue reaction to the OxyChip was well within expectations for an implanted device [1].

The pO2 data demonstrated the need for individualized assessment of tumor oxygenation in the context of planned hyperoxygenation interventions to optimize clinical outcomes.

Dr. Kuppusamy is a tenured Professor in the Departments of Radiology and Medicine at the Geisel School of Medicine, Dartmouth College. He received his PhD in 1986 from the Indian Institute of Technology, Chennai, India. Following a 2-year Fogarty Fellowship from NIH/NIA, he became a faculty in the Department of Medicine at the Johns Hopkins University School of Medicine, in 1987. He then moved to the Ohio State University in 2002, where he was holding the William D. and Jacquelyn L. Wells Chair in Imaging Research. He also served as the Associate Director of the Division of Cardiovascular Medicine. He joined the Geisel School of Medicine at Dartmouth College in 2013. Dr. Kuppusamy’s research interests include free radicals, oxygen and oxygen biology in cardiovascular diseases and cancer. He is well-known for his expertise in the development of imaging methods for imaging oxygen and free radicals in biological systems. Dr. Kuppusamy has received numerous research awards including Silver Medal in 2006 from the International EPR Society for significant contribution to the development of EPR imaging for biomedical applications and Doctor of Medicine (honoris causa) in 2008 from University of Pecs (Pecs, Hungary) for cardiovascular research. Dr. Kuppusamy has published 400 peer-reviewed research manuscripts in leading biomedical journals. He has received several research grants from the American Heart Association and National Institutes of Health. He has several patents on the probes and methods for determination of oxygen concentration in tissues. One of his inventions, OxyChip, is currently in a Phase I clinical trial.